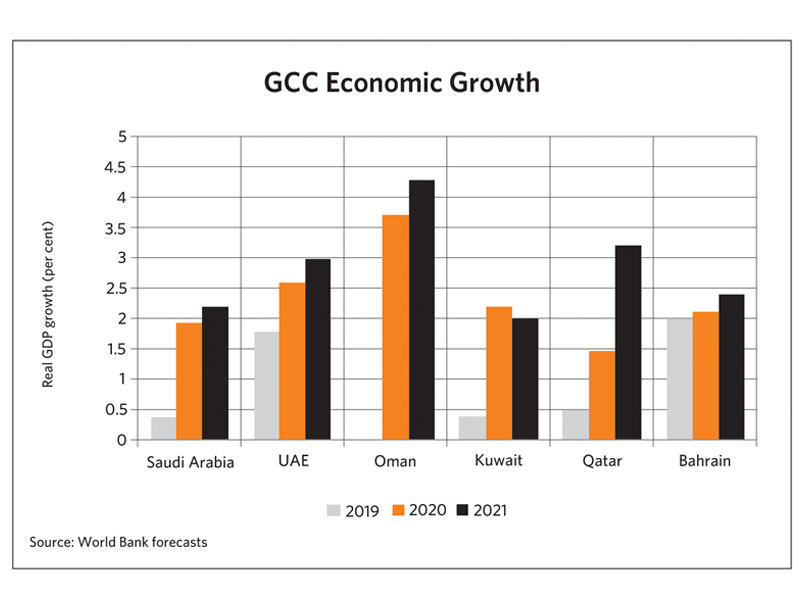 Given the rising natural gas production and positive results from the Tanfeedh programme, the World Bank remains bullish on Oman’s growth potential in the medium-term and expects the sultanate to become the fastest-growing economy in the GCC in 2020 and 2021.

The World Bank expects that the economic growth in the GCC will be weak for 2019, before recovering in 2020 and 2021.

Oman was the GCC’s fourth largest gas producer in 2018, but output is rising from new gas fields, the World Bank noted. ‘The first phase in the development of Oman’s giant Khazzan gas field, which started production in September 2017, has reportedly reached its design capacity of around 1bn cubic feet of gas per day. The second phase development, which was sanctioned in April 2018 and is expected to come onstream in 2021, will deliver an additional 0.5bn cubic feet of gas per day.’

Supported by the National Program for Enhancing Economic Diversification (Tanfeedh), Oman’s non-oil economy is projected to grow by 4 per cent per year over the medium-term, the World Bank said.

‘Oman’s Tanfeedhprogramme aims to boost non-oil development. The programme is derived from the ninth five-year plan (2016-2020), which consolidates the government’s strategies for manufacturing, transportation, logistics, tourism, and fisheries sectors. Some 121 projects and initiatives have been launched in five areas, including non-oil manufacturing, logistics, tourism, financial services and labour markets,’ the World Bank said.

Acknowledging the efficiency of the Tanfeedhprogramme, the World Bank said Oman’s Tanfeedhprogramme was developed through the active participation of the private sector, academic community, civil society, state-owned enterprises, and public agencies.

On the sultanate’s fiscal position, the World Bank said Oman has recorded annual deficits since 2009, and projected deficits range from 8.4 per cent of GDP in 2020 to 6.5 per cent in 2021. ‘These high but narrowing deficits would keep gross general government debt to an average of 63 per cent of GDP in 2019-2021. The authorities implemented excise taxes on tobacco, energy drinks, and carbonated drinks in 2019, but delayed plans to introduce the value-added tax (VAT).’

The World Bank added that Oman’s new Commercial Companies Law, which was introduced earlier in 2019, has helped modernise the country’s framework for regulating public joint stock companies and listings of shares, bonds and sukuk.

According to the World Bank, non-oil revenue mobilization will be critical for the GCC countries to reduce the fiscal impact of oil-price volatility, and further delays in VAT implementation in Kuwait, Oman and Qatar must be avoided.