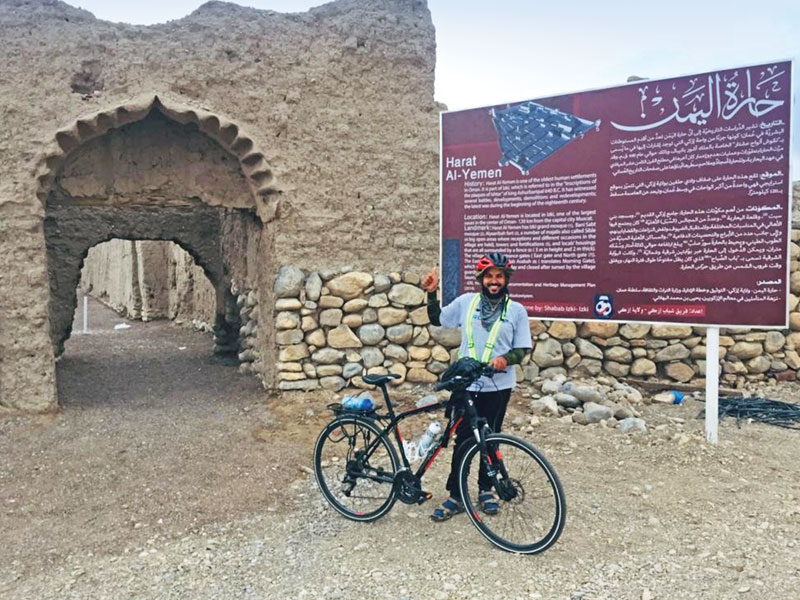 “In 2010, I started cycling and have gone on five tours so far covering various governorates of the sultanate. However, this tour was the longest. My tours aim to promote tourism in these wilayats and spread the culture of cycling among the society. I used to cycle from 8am to 5pm, travelling 80-100km in a day. I visited popular tourist sites like towers, castles, old markets and Harat al Yemen.”

He said that Harat al Yemen is one of the oldest human settlements in Oman. “It is located in Izki, one of the largest oases in Oman, 120km from Muscat. It has also the Grand Izki Mosque, Bani Sabt Mosque, Al Yaaribah fort, a number of majlis also called Sible (big open areas where receptions and different events in the village are held.”

He said, “Rain and the strong winds were some of the biggest challenges that confronted me but I overcame them with determination and patience. Such trips need financial support. I used to take break to eat sandwiches and drink water during the course of the journey.”

On future, he said, “I plan to have more such tours to promote domestic tourism and create awareness on beach cleanliness. I hope such tours raise awareness on social issues. I urge Omani youths to take part in such voluntary campaigns for the betterment of the society.”