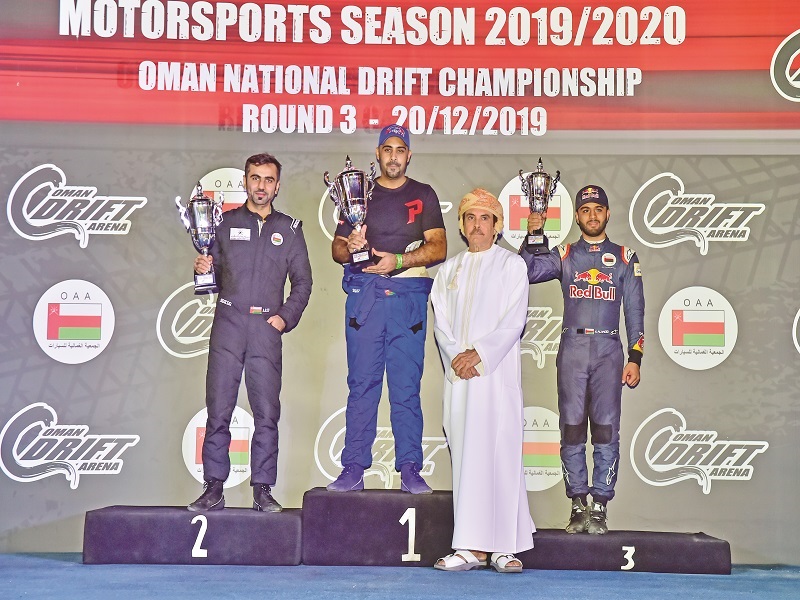 Despite finishing third in the third and final round of 2019 Oman Drift Championship Haitham al Hadidi had done enough to garner a total of 278 points and be crowned overall champion at the Oman Automobile Association (OAA) Speed Arena on Friday night. Sami al Shaibani claimed top honours in the final round. Tariq al Shaihani claimed the overall second with 246 points and Ahmed al Amri finished third with 225 points.

On Friday, Arif al Balushi ended up as runner-up to Shaibani and finished fourth overall with 194 points. Riyadh al Mabsali, who ended fourth, was overall fifth with 174 points. Speaking after being crowned the champion Hadidi said, “I wanted to win the overall title with a win in the final round but it did not happen due to some technical issues with my car. But I am happy to claim the overall honours.”

For Shaibani, it was a successful outing after missing the previous two rounds. “I could not take part in the earlier rounds because of non-availability of my car. For this round my car was ready and I am satisfied with my performance,” said Shaibani, who finished sixth overall with 163 points. Ali al Shaibani was seventh (152 points) and Mazin al Shaibani came eighth (102).

Eighteen drivers, including Saeed Ahmed Nafar from the UAE, were in action at the OAA Speed Arena on Friday night. The best-eight then advanced to the next round with top-four – Riyadh al Mabsali, Haitham al Hadidi, Arif al Balushi and Sami al Shaibani – making it to semifinal round.

Shaibani and Balushi then went into the final round before Shaibani winning the round. Hadidi prevailed in the thirdplace playoff against Mabsali to ensure his championship title. The final round also witnessed the twin-drift challenge for the first time at the local championship.