‘Oman Sail to be torchbearer of sports tourism in the sultanate’ 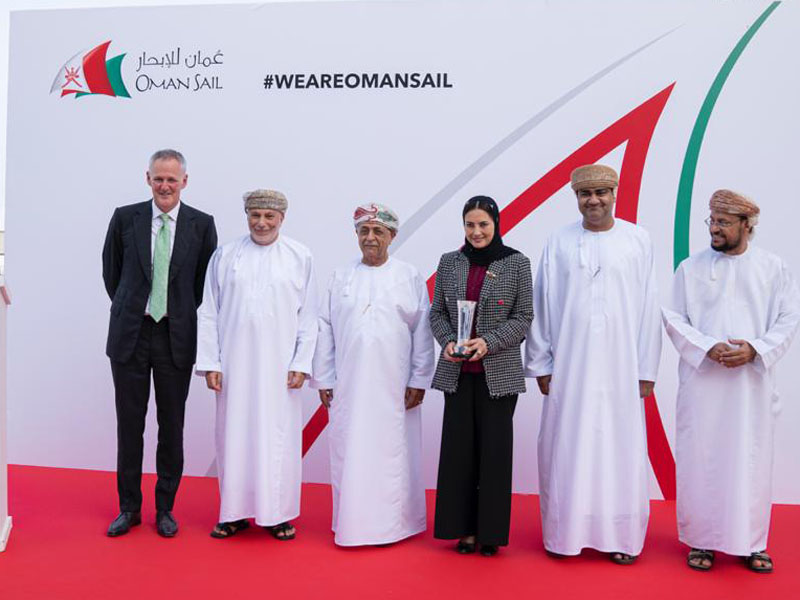 It has been a remarkable year for Oman Sail as it marked its tenth anniversary since it was  established in 2009 and as it gears up for the next decade, the key word in its march ahead will be sports tourism. Sports tourism is expected to be one of the key pillars of the sultanate’s strategy for tourism in future, according to  H E Maitha al Mahrouqi, the Oman Sail chairwoman and  Undersecretary in the Ministry of Tourism (MoT).

In her exclusive remarks to Muscat Daily, H E Maitha said, “Oman Sail’s contribution has had a major impact in boosting sports tourism in the sultanate. The organisation’s fundamentals have been to rekindle the  glorious maritime heritage of Oman but over the years, Oman Sail has done a terrific job of not only promoting sailing as a sport but also putting the country on the global map of sailing.

“Oman Sail has worked hand-in-hand with MoT and the  Ministry of Sports Affairs. It has executed the plans of MoT in an efficient manner over the years.

“The results have been impressive and what Oman Sail has achieved is an example for other organisations to follow. Oman Sail has shown to the world its organisational abilities by hosting world championships over the years but what has been the standout feature is the incubation of locally-developed events.”

To Oman Sail’s credit, it has launched two international  sailing events – Sailing Arabia – The Tour (SATT), Mussanah Race Week (MRW) – that have attracted sailors and teams from across the world. And over the past few years, Oman Sail ventured into non-sailing events with an eye to  promote tourism potential through sports. Oman Sail has been  successfully organising now the popular annual Al Mouj Muscat Marathon, a festival for runners, which in 2019 attracted more than 8,000 participants of 103 nationalities.

And a sizeable number of  participants were Omanis with the official figure at 4,316. The economic impact of the 2019 edition of the marathon was valued to be RO3.8mn. Besides the marathon, Oman Sail has achieved plaudits for  organising two major non-sailing events – Haute Route Oman and Oman by UTMB – that  showcases the true potential of Oman’s tourism with the cyclists and athletes travelling to interior regions. While a total of 1,966 runners of 73 nationalities took part in Oman by UTMB last month, 262 participants of 35 nationalities had competed in Haute Route Oman in March. Oman Sail’s chairwoman spoke highly about these events and believed that such initiatives will be the bedrock of the growth of sports tourism in the country.

“It has been a fantastic effort by Oman Sail by hosting such events that has developed an Oman-centric ecosystem. The goal is to have a balance of sports and tourism activities and work in alignment with the stakeholders – Omran, sports and tourism ministries. “We at MoT do the planning but the execution arm of our planning is Omran. And to have proper coordination and execution of plans, Oman Sail has been brought under Omran.”

Omanisation  a key factor H E Maitha said that one of the major achievements over the past decade at Oman Sail has been the training and hiring of Omanis. “I am proud to say that in the latest organisational  structure, we have Omanis at the top posts and are part of the 91 per cent local workforce. It underlines the government’s vision to have Omanis at senior level and they have been doing an  excellent job,” said the Oman Sail  chairwoman.

She said, “Oman Sail today is one of the leading organisations and it is on the right path to grow and implement the various plans under Oman’s Vision 2040 and Tanfeedh programme. The vision is clear to make Oman Sail the torchbearer of sports tourism in the sultanate.”

Oman Sail recently organised an event to celebrate its success during 2019 and its CEO, David Graham, was satisfied at the  allround progress. “It has been a fruitful and eventful year and I am happy to say that we are on the right path,” he said.

While the sailors fetched medals at region and Asian level regattas and are hoping to make it big next year by qualifying for the Tokyo 2020 Olympics, there were record participations in events like Al Mouj Muscat Marathon, Haute Route Oman and Oman by UTMB  besides successes in delivering leadership programmes. And the icing on the cake for Oman Sail was the 2019 World Sailing President’s Development Award, which was received by Graham from the World Sailing president Kim Andersen, at the World Sailing Awards ceremony in October.