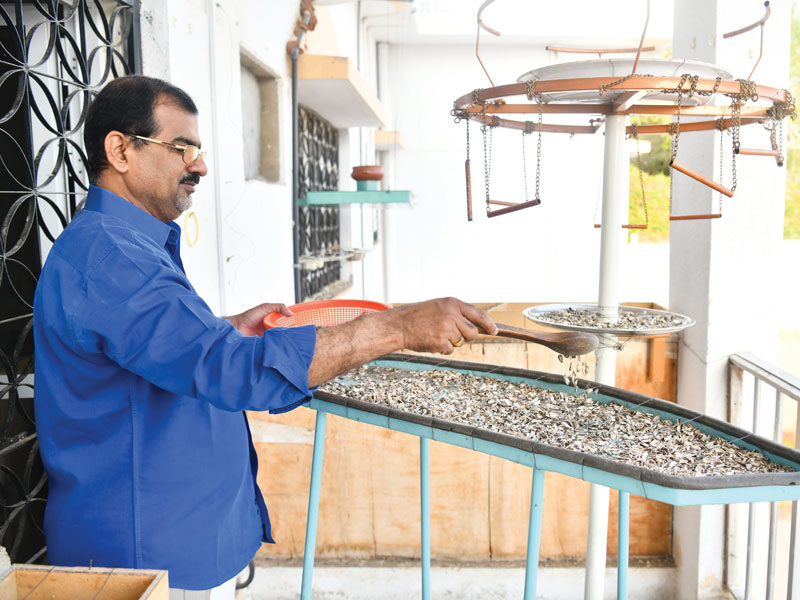 Animals have a sixth sense; they sense the future. That can be the only explanation for the hostile reception Hari Kumar A K received earlier this month when he returned from a visit to India before leaving Oman for good on November 3. They could sense the hand that fed them for 13 years would be gone.

In the last that many summers, when Hari Kumar and his family came back from vacations in India, the reception was very different. News of their return spread fast and most of the birds would be back the very next if not the same day, Hari Kumar fondly recalls. They’d all come back, but if anyone – including Hari Kumar – stepped out to the balcony during feeding time, the birds flew away.

This time around, it was different. Hari Kumar and his wife Geetha hadn’t returned from a vacation. The couple had come to Muscat for the last time after sorting out matters in India before returning home for good after 27 years in Oman. Probably sensing lost love, the parrots screeched and came at Hari Kumar “like missiles”. He felt like being under attack, unlike the earlier reunions when the birds flew away if their feeding sessions were interrupted by anyone in Hari Kumar’s balcony.

His was the hand that fed the birds, but he never hand-fed them. “If the birds got used to that, they’d lose their fear of human beings and become easy prey for bird trappers. I didn’t want to interfere with their natural instincts, their survival instincts,” he explained.

A prattle of parrots descended on Hari Kumar’s balcony every morning and evening to feed on sunflower seeds and rice. This had been the routine since 2006, the only exception being during the family’s annual summer breaks when the birds were fed in Hari Kumar’s apartment terrace.

The curious sight played out with clockwork precision every day. At 6am, the parrots winged their way to Hari Kumar’s apartment in Al Falaj Block No 121. While some perched on the overhead power lines adjacent to his first floor balcony awaiting their turn at the seed trays, others caught their breath on trees in the neighbourhood. As one batch of birds took flight after they’d had their fill, another batch flew into the balcony and settled down for breakfast or supper.

Batch after batch followed. The family fed 300 birds – a conservative estimate – every morning over a period of one and a half hours. There was a re-enactment of the scene in the evening at 4pm when the number of birds was smaller. And though there was an occasional dove or a pigeon, it was mostly parrots – Ring-necked, Alexandrine and rarely Plum heads, Monk parakeets, budgies or Yellow parrots – on the guest list.

“I witnessed their whole life – parents taking the seeds for the chicks from the feeding trays, then when the chicks could fly, the parents brought them to the balcony. After some coaxing, the chicks would come to the feeding trays, but didn’t know how to eat the seed, how to get the kernel inside…” he said. “We saw birds at every stage of their life, other than the laying of eggs and the hatching.”

He served the birds sunflower seeds and rice, adding RO160 to the family’s monthly food bill. The parrots are picky eaters too. Hari Kumar tried – unsuccessfully – to introduce some variety in the menu, offering chillies, paddy husk and fruits like guava, apple and bananas on the food trays which went untouched. So eventually the hosts decided not to serve anything other than sunflower seeds and rice. The food was dutifully laid out at 5am in the winters and 10pm during summers for their morning feed.

It all started sometime in 2006 when Hari Kumar bought a cage with five parrots. The cage was too big to be kept inside the house and had to be placed in the balcony. The parrots were boisterous and made a ruckus as they called out to birds that flew by to drop in for a bite at mealtime in the mornings and evenings.?But soon, the noisy parrots got on Geetha’s nerves. She couldn’t take it any more and asked Hari Kumar to take the cage to Ma’abela and release the five parrots.

But by this time, the free birds – that stopped by at the balcony after Geetha had laid out the food for the caged parrots every day – had got accustomed to this routine. These parrots continued to come. There’s no way of telling, but some of the birds from 2006 probably visit even today.

Apparently, Hari Kumar’s neighbours, including some in the same building – with balconies at the same level and facing the same direction – tried to attract the parrots with food and drink, but their invitations weren’t accepted.

The curious phenomenon was even more spectacular after rains when the parrots perched on the power lines in front of Hari Kumar’s balcony all the way till Al Falaj Hotel. On occasions, guests from the hotel followed the power lines and found their way to Hari Kumar’s building to click photographs of the birds.

Besides the food, Hari Kumar incurred other expenses for the parrots which he revealed on a little prodding. He got perches and food trays fabricated in his automobile workshop in Ma’abela, tinted glass in the living room windows so that the birds were not disturbed while they fed, and nets in his neighbour’s balcony directly under his as the parrots lacked table manners and were messy eaters. “After picking out the kernel, they dropped the sunflower seed shells all over the place some of which fell into our neighbour’s balcony littering the place.” Geetha cleaned the balcony while their houseboy swept the area under it after every meal twice a day.

But these were only minor issues considering the adjustments the family had to make for the sake of the parrots. Hari Kumar wouldn’t allow any noise in the living room when the birds visited; everyone had to be on tiptoes. “The moment they heard a sound, they flew away,” he explained why. The family also had to put up with the cacophony that accompanied the feeding frenzy every morning and evening. The larger Alexandrine species, though friendlier than the other parrots, were particularly noisy. Besides, there was the matter of space. The couple has two sons, who were deprived of separate rooms because Hari Kumar refused to move to another house for fear of losing his winged guests. “We really needed to move into a bigger apartment, but what about the birds?!” Geetha exclaimed.

She and Hari Kumar left Oman on November 3. They left six bags of bird food to suffice for a month. The houseboy who used to feed the birds in their absence will continue to serve the birds every morning and evening in the same apartment’s terrace till the food runs out at the end of this month. What after the food runs out? The couple is clueless.