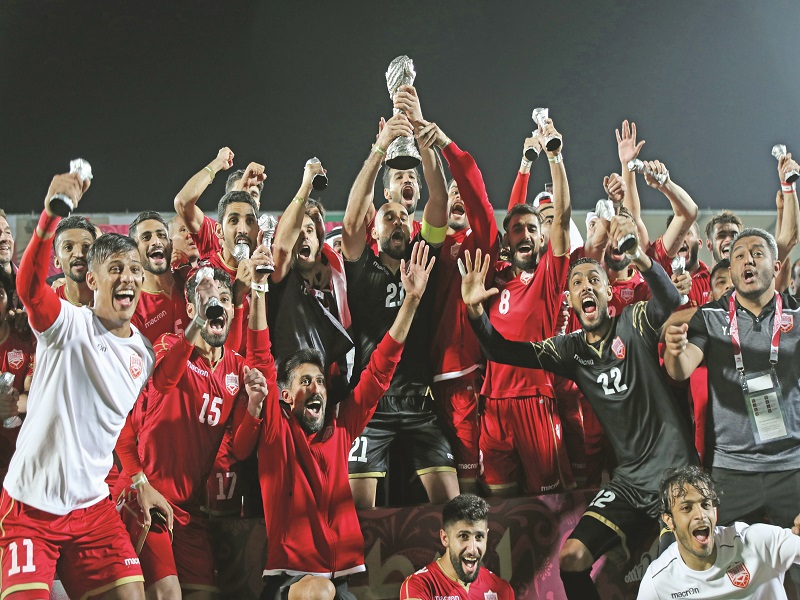 The wait is finally over. Bahrain, which has endured the wait for the title since the inception of the regional showpiece in 1970, when it finished runner-up to Kuwait, ended the drought on Sunday at the Khalifa International Stadium in Doha, Qatar.

Coached by Portuguese Helio Sousa, Bahrain edged past fancied and three-time champions Saudi Arabia 1-0 in the summit clash that reflected the Red Brigade’s determination and desire to lift the Gulf Cup more than any other side. Following the conclusion of the 24th edition of the region’s biggest football tournament on Sunday, Kuwait leads the honours’ list with ten titles, the last of which came in 2010 while Saudi Arabia, Iraq and Qatar have three titles each. Oman and UAE have two crowns each.

After it hosted the inaugural edition and where it ended runner-up, Bahrain was denied the trophy three more times. It lost to Kuwait in 1982, and then came second to Qatar in 1992. It gained a bit of revenge on Sunday against the Saudis as it had denied Bahrain the title during the 16th edition in 2003-04 before finally laying hands on the glittering trophy.

At the Khalifa International Stadium, where plane loads of Bahraini fans were flown in to watch the final, it was a quick counter in the second half that got the all-important goal as Mohamed al Romaihi scored in the 69th minute for Bahrain’s first-ever Gulf Cup glory. Saudi Arabia started strongly with Salem al Dawsari hitting the woodwork with the game just three minutes old. A curling strike had Bahrain goalkeeper Sayed Mohammed Jaffer beaten, but the post denied the Al Hilal star. Dawsari then handed the Green Falcons a golden chance to take the lead.

A surging run into the box was halted by Bahrain midfielder Mahdi al Humaidan, leaving the referee little choice to point to the spot. Salman al Faraj stepped up and missed the penalty, slotting the shot wide. Bahrain gradually imposed itself and Humaidan had couple of opportunities. First, his shot was gathered by Saudi keeper Fawaz al Qarni and then a header at the near post from him was tipped over the bar. Saudi had a second penalty appeal turned down when Abdullah al Hamdan was pulled down in the penalty box.

After a VAR review, the spot-kick was ruled out as the first half ended in a goalless stalemate. Sousa introduced Brazilianborn striker Thiago Augusto in the second half and the move worked as his presence upfront brought in more organised attacking play. After a period of playing smart football, Bahrain’s efforts paid dividends.

The decisive goal came when Humaidan sent in a neat ball from the right flank towards the goal and Romaihi got ahead of his marker to guide in the cross and hand his side a vital lead, which the Bahrainis held on spiritedly for a deserving victory for the remaining half hour and nearly eight minutes of injurytime.

With Bahrain claiming its maiden title, Yemen is the only team among the eight participating nations that has not won the title.