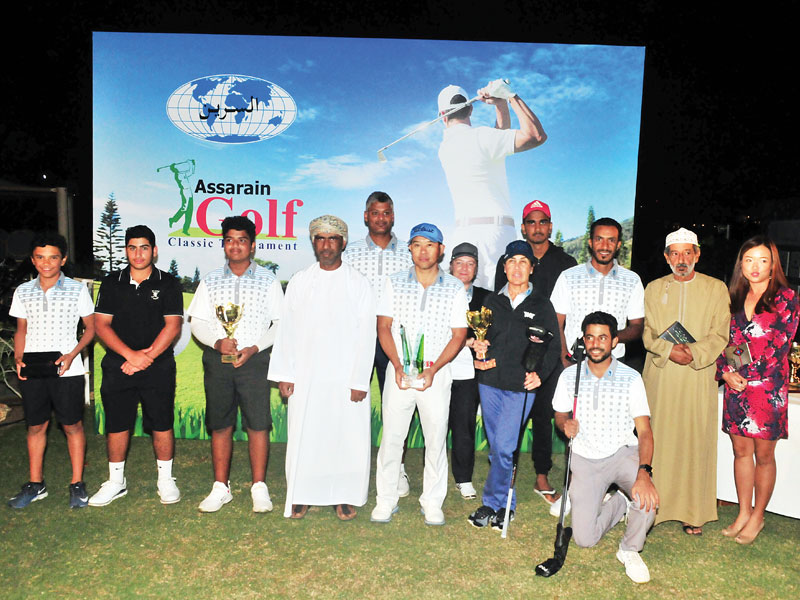 As many as 140 golfers from the sultanate and overseas participated in the fiercely contested 24th edition of The Assarain Golf Classic. The participants were competing in the 2-day, 36-hole event with Gross and Nett categories in Men’s, Ladies and Junior divisions.

The event was held at the Ghala Golf Club and was open to all amateur local and international golfers with a registered USGA handicap.

The 2019 Assarain Golf Classic has continued with commitment to expand their annual event. The 2019 event attracted more international players than any previous years. Leon Sassen, General Manager of Golf World, said, “This event is a pinnacle tournament in the golfing calendar. We reached capacity after 48 hours, adding to another record set by the Assarain Group of Companies. This proves how popular the tournament is. I would like to extend a big thank you to all of the players for their support of the event, it was a fantastic two days and overall a tremendous occasion.”

In the Men’s gross category, after the first day of play, Fiaz Riaz shot a 73 to be clubhouse leader by one shot over defending campion Ahmed Ejazz and Oman National Team player Badr al Amri. Hamed Faris from Bahrain shot 75 followed closely behind by Tenzin Tasrong who finished with 77.

The Men’s Nett Category was another closely evened scoring after the first day with Mark Davies shooting a tremendous nett 66 to be leader after day one of play.

In the ladies division, Jameela Daud finished the day with a score of 88 in the lead over Emma Merrit and Jacky Franssen.

The evening gathering was held at Ghala Golf Club with live entertainment and live cooking stations to help ease players into day two of the tournament.

Jameela Daud won the ladies gross category with another impressive 90 on day two for a combined total of 178.

The Men’s gross category was a close match between Faiz Riaz, Ahmed Ejazz and Tenzin Tasrong. The lead switched places throughout the day as all players battled the windy conditions. The closing holes proved to be crucial as Ahmed Ejazz would bogey the 18th hole to drop into tied second place with Fiaz Riaz. Last year’s runner up, Tenzin Tasrong, kept his nerves and played outstanding shots around the course to be crowned the 2019 Assarain Golf Classic Champion with scores of 77 and 74 giving him a total of 151.

Commenting upon his win Tenzin Tasrong said, “After coming runner-up last year I made the decision that this year I would win. I worked hard on my game with the sole purpose of wining this year’s tournament. I would like to thank the Assarain Group of Companies for creating this event and a big thank you to my playing partners. I look forward to next year’s tournament.”

The Assarain Classic ended with the tradition of raffling off a Rolex watch. This year’s winner was a special one for Ghala Golf Club! Long term founding member, Mohammed Suliman al Wahaibi, who was involved with the original opening of the club before it was grassed, was the winner this year.

Commenting upon the success of the event, Ibrahim al Wahaibi, Managing Director of Assarain Group of Companies said, “I would like to congratulate all the winners in the respective categories. We were always committed to hosting a tournament that sets a new standard every year, even with the unpredicted weather prior to the start we had no intentions of diminishing the professional and high-quality standards that are expected from this tournament.”