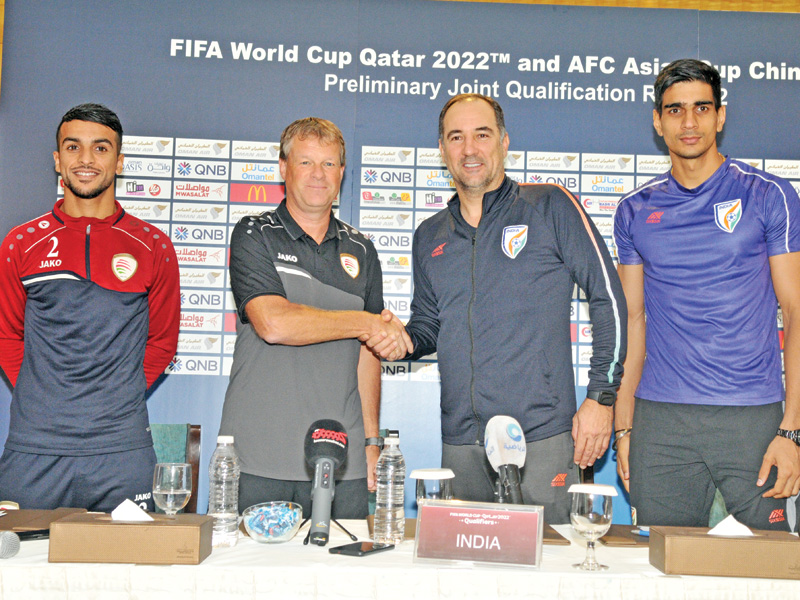 Four days after hosts Oman achieved an impressive 4-1 win over Bangladesh at the Sultan Qaboos Sports Complex (SQSC), Erwin Koeman’s Red Warriors seek to repeat the show, this time against a much-improving Indian team, when they meet at the same venue on Tuesday. The match kicks off at 7pm.

The Group E qualifier of the joint 2020 FIFA World Cup and 2023 Asian Cup assumes greater importance for the visiting Blue Tigers as Igor Stimac’s wards look for its first win in their qualifying campaign where it has tasted one defeat [against Oman in September] and played three draws so far.

For Koeman, it will be yet another opportunity to underline his men’s credentials as a powerhouse at home with his team already pumping in seven goals in two games in Muscat while conceding just one.

However, the Dutchman is also aware of the tough times his team faced in the opening game of its campaign away in the northeastern Indian city of Guwahati on September 5.

Oman rallied from a goal down to scrape to a 2-1 win with attacking midfielder Al Monther al Alawi saving the blushes for the much-higher ranked team. Oman is presently No 84 in the FIFA rankings while India is placed 106.

After three draws and a defeat, India is fourth in the Group E table with three points, while Oman is second with nine points from four matches. Qatar is on top with ten points.

Speaking at the pre-match conference on Monday, Koeman said, “We are much-better prepared this time as compared to our last meeting in Guwahati. Then, both the teams had players who were rusty with the leagues in both countries not yet begun. Now, our players are in good conditions.

“India is a good team with solid organisation but we know that we are better side. We have the confidence but we cannot underestimate them. If we do, then it would be a big problem.”

The Dutchman, who will be leading his team to the forthcoming Gulf Cup defence, said that ‘he is aware of India’s strengths and weaknesses’ and hinted at couple of changes for the game.

Oman’s experienced defender Mohammed al Musallami said ‘we are aiming for a win against a difficult opposition’. “Our first away game against India was not easy but we are confident this time in front of our home fans.”

Stimac, India’s Croatian coach, said he ‘personally did not believe in home or away advantage’ and was hopeful that his team will provide good football on display.

He said, “Wherever we go, we have one intention – to win. We will go all out and try for a positive result.”

Stimac said that he had ‘great respect for Oman’ and along with Qatar are the favourites in the group.

“I know that it is a tough match but I want my boys to enjoy the match. We hope they could do well to get a result,” said the former World Cup bronze-medallist from Croatia.

On the team’s late comeback in the past two games against Afghanistan and Bangladesh, Stimac said that it ‘displayed the team’s character and was proud of it’.

“We have improved a lot since I took over in May. We may not have reached a level where we are winning regularly but we have become a side that is difficult to beat,” said the coach.

“I think he is one of the best footballers I have known. I had trained along with him few years back and have lot of respect for him,” said the lanky Indian shot-stopper.

“I met him when we came here in 2015 and I’d be glad to see him once again tomorrow. I wish him all the luck for tomorrow as well,” said Gurpreet.

He added, “We have come here to play to our best abilities and we will try our best to do our job. We will try to make things difficult for Oman and hope to get a result.”

Stimac also had a word of praise for his defender Anas Edathodika, who lost his mother ahead of Afghanistan game, but has returned to be with the team in Muscat.

His return shows his commitment to serve the country and I am proud of such players in the team,” said Stimac. India is missing the services of defender Sandesh Jhingan, defensive midfielder Rowlin Borges and midfielder Amarjit Singh due to injuries while Oman’s experienced midfielder Raeed Ibrahim Saleh will continue to be out of action after he suffered injury last month against Qatar.

India will once again rely on its talismanic captain Sunil Chhetri with the Oman team also aware of the rival team’s set-pieces strengths.

A loss will more or less close the doors for India’s hopes of qualification for 2022 World Cup. For Koeman, it will be the perfect boost ahead of the Gulf Cup title defence, starting in Doha, Qatar, on November 27.