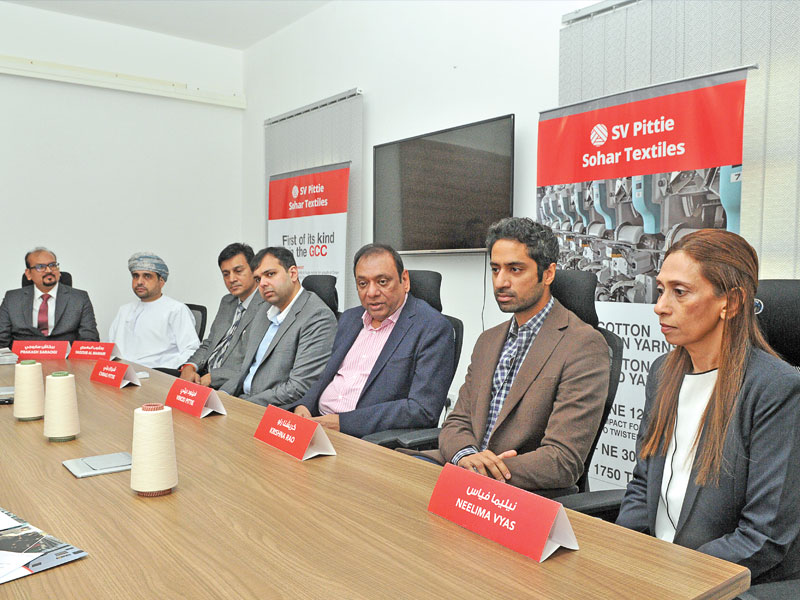 SV Pittie Sohar Textiles on Thursday announced the commencement of production on Unit 2 at its world-class cotton yarn production facility in Sohar.

The company already commenced production of Unit 1 in December 2018 and since then has been committed to building capacity, providing training and employment for Omani nationals. SV Pittie Sohar Textiles is part of India-based ShriVallabh Pittie Group, one of the largest manufacturers of compact cotton yarn in the world.

Speaking at a press meet, Vinod Pittie, chairman of ShriVallabh Pittie Group, said, “The commencement of production at SV Pittie Sohar Textiles marks the beginning of a new industrial journey for Oman, opening up a robust growth sector, and in placing Oman firmly and strategically in the global textile industry. SV Pittie Sohar Textiles is a result of the vision and leadership of His Majesty Sultan Qaboos bin Said and his government for creating a favourable and excellent business environment for investments and promotion of non-oil exports.”

In line with Oman’s ambition for economic diversification, Pittie said SV Pittie Sohar Textiles has been established as a 100 per cent export-oriented Omani textile company. As a first-of-its-kind in the entire GCC region, SV Pittie Sohar Textiles has the unique advantage of being strategically located on the global trade route. The company is envisaged to bring in non-oil export revenue to the tune of approx US$240mn every year, exporting cotton yarn to countries such as China, Pakistan, Bangladesh, Vietnam and other countries.

“Apart from the economic opportunities, the company has pledged jobs to 1,000 Omani women, who are under training at the training centre being set up with the fullest cooperation of the National Training Fund and the Ministry of Manpower. The centre incorporates experiential learning through advanced textile machinery installed,” Pittie said.

The official inauguration of the SV Pittie Sohar Textiles Unit 2 at Sohar Free Zone has been planned for November 20 at Sohar Free Zone. H E Sheikh Abdullah bin Nasser al Bakri, Minister of Manpower, will be the guest of honor, the company officials announced. From a microeconomic perspective, Pittie said the company is laying strong foundations to nurture the culture of entrepreneurship in the country and support the government’s efforts to boost employment and job creation through SMEs.