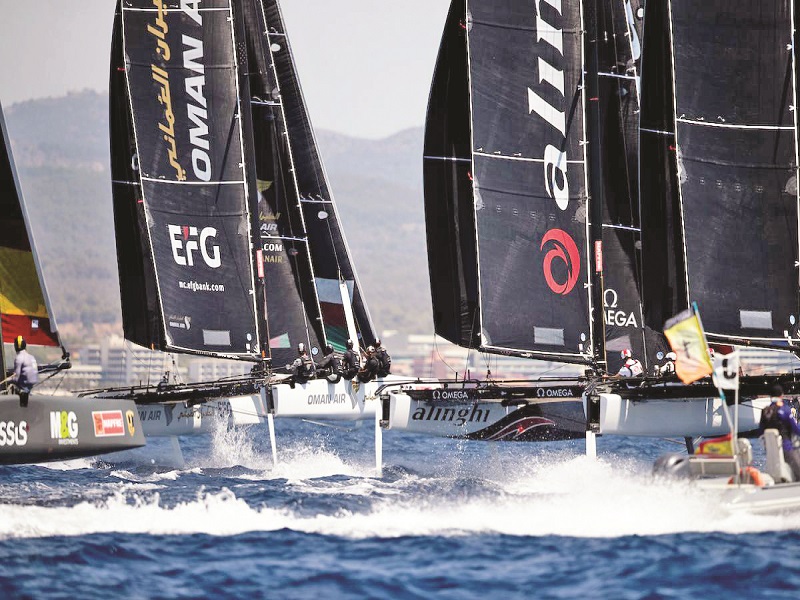 It is a straight fight for the season’s top honours between Oman Air and Swiss team, Alinghi, as the final and fifth leg of GC32 Racing Tour – Oman Cup – gets underway at the Al Mouj Marina from today.

After 73 races, across four events in three countries, the finale could not be closer. Ernesto Bertarelli’s GC32 world champion Alinghi and Oman Air, skippered by New Zealander Adam Minoprio, have been at each other’s throats for the entire season and with two event wins and two seconds apiece. They are tied at the top of the leaderboard going into the final event.

At the last event held in September in the Italian city of Riva del Garda, the teams were involved in a thriller and finished tied, though Alinghi was declared winner on tie-break rule as it clinched the final race.

When the high-performance flying one-design catamarans race out of Al Mouj Marina, over the next four days, the Oman Air crew will enjoy a home team advantage, having been racing on these waters for a decade, initially with the Extreme Sailing Series. However that was before Minoprio joined, although the Kiwi has competed in Oman.

“It is going to be a fun final in the hometown of our team,” said Minoprio.

“Of course, we know it is going to be a close affair and we have to keep an eye on Alinghi. We might just have to race them a bit to ensure we win the series. We are going to be neck and neck and it would be nice if it were a match race, but there are other boats there too and we don’t want to finish at the back.

We want to make sure we are on the podium, ahead of Alinghi.”

With Minoprio and Peter Greenhalgh is Omani crew  Nasser al Mashari, who is one of the longest-serving crew having started sailing on board the Extreme 40s a decade ago.

Mashari said, “It is special, having the last event in Oman and it is still tight in the overall series with Alinghi, the strongest team in the fleet. So I am really excited and proud to be where we are. We hope to win, but Alinghi is a very strong challenger.”

Having represented Oman at such a high level for so long, Mashari is upbeat on having his family and friends watching him closely. “My family and friends and our colleagues at Oman Sail will be there, so we will have a lot of support from them. We’ll have the Oman flag up there…”

Peter Greenhalgh, Oman Air’s tactician and mainsail trimmer, said, “Having the final event of the season in Muscat is a big deal for us,” said .

“Oman has been involved with the Extreme Sailing Series since 2009 and now the GC32 Tour, and Muscat has hosted various events but never the final, and never the final where we can win the entire circuit. Being Oman Sail’s tenth anniversary this year means that it will be a huge celebration if we can pull it off.”

Oman Air had won the  Villasimius Cup in Sardinia, Italy, and Copa Del Rey Mapfre in Mallorca, Spain, earlier in the season.

Oman Air, however, has had to make one crew change in the run up to the Oman Cup, with skipper Minoprio, Greenhalgh, Mashari and Stewart Dodson joined by former crewmate James Wierzbowski of Australia, who is stepping in for injured regular crew, Adam Piggott.

If Oman Air has spent the most time sailing in their country, Alinghi is close behind. “We love Oman – we spent quite a bit of time there, racing but also winter training,” team director Pierre-Yves Jorand was quoted on the official GC32 Racing Tour website.

“It is a great venue but we have never sailed there in November. I’m sure there’ll be an open course, sea breeze and some chop sometimes – we will be ready whatever the conditions. We can be sure it will be a super tight fight between the teams,” added Jorand.