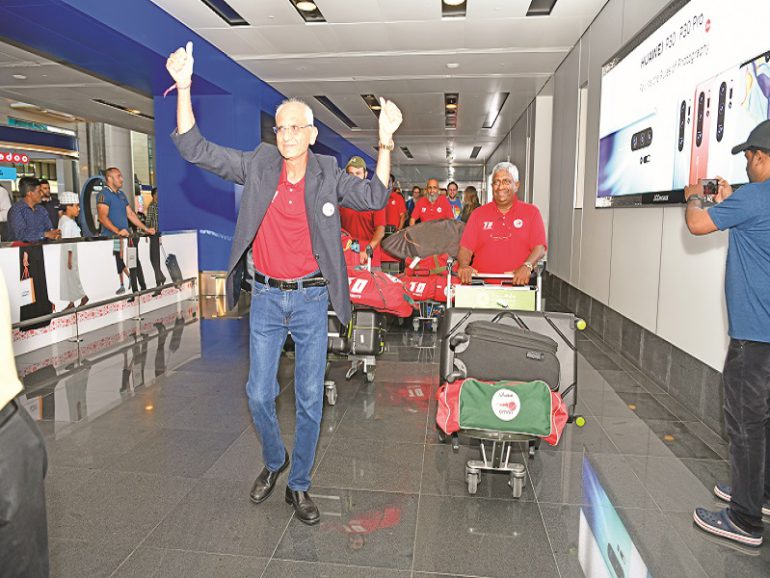 Mission accomplished. That’s how Oman’s head coach and Sri Lankan great Duleep Mendis summed up his team’s qualification into the 2020 ICC T20 World Cup on their return to Muscat from Dubai on Friday.

Mendis’ men were accorded a grand welcome by Oman Cricket board members, players’ families and friends, cricket fans and Ministry of Sports Affairs (MoSA) official after the team booked the last spot available for the next year’s showpiece event with a win over Hong Kong on Wednesday night in Dubai.

It will be the second time that Oman will be participating in the T20 World Cup, having played in the group stage of the 2016 T20 World Cup in India.

And as one would expect top coaches to be, Mendis is already looking ahead of his team’s plans and schedule with ‘balance’ of T20 and 50-overs squads his prime concern.

In his exclusive chat with Muscat Daily on Friday evening after experiencing the rapturous welcome in the morning, Mendis said, “I always believe that my team is going to win. We may not win every time, but my belief is always there. And it is this belief that I carry all along.”

The former Sri Lankan Test great said that his team has the potential to advance from the group stage in next year’s T20 World Cup.

Oman along with the other five teams from the T20 World Cup Qualifier – Papua New Guinea, Ireland, Netherlands, Scotland and  Namibia – will join Sri Lanka and Bangladesh in the first stage of the T20 World Cup.

At the 2016 edition, debutant Oman failed to make it to the next stage but Mendis thinks that his men now have the potential to be among the four teams that will qualify into the next round – Super 12. The teams in Super 12 are Pakistan, India, England, Australia, South Africa, New Zealand, West Indies and Afghanistan.

‘Potential to enter next stage in Australia’

Mendis said, “I think we have a fair chance of making it into the next stage. We have beaten all the teams that have advanced from the UAE Qualifier. As four teams will progress, Sri Lanka and Bangladesh will be the favourites among the eight in the group stage. We  definitely have the potential to be among the top-four.

“But it wouldn’t be easy as we have to work hard and plan carefully our schedule till next October, when the World Cup will be staged. We are also in the race for a spot in the 2023 50-over-a-side World Cup and have begun well.

“Unfortunately, we do not have a large pool of players available. So, we need to balance our players’ resources. That will be the key as we play competitions in both formats.”

Mendis said ‘it is the reason’ that we are now resting skipper Zeeshan Maqsood, pacer Bilal Khan and allrounder Khawar Ali for the upcoming assignment – 2019 Emerging Asia Cup in Bangladesh from November 14-23. Syed Aamir Kaleem will lead the Oman side. The

‘Focus on fitness and mental strength’

“The key challenge for us is the players’ fitness and we have to work much more on this front. The players showed good standards in the recent qualifier but I would like to take them a notch above. We have now hired a full-fledged trainer in Evert and this is an area we need to build further,” opined the coach.

Mendis said that his team has ‘adequate technique’ to take on the might of the rest of the world but his players need to gain ‘mental strength’.

He said, “That is something we need to work on and we are in the process of making our players more stronger mentally. It came to the fore when we played against Hong Kong in our do-or-die game on Wednesday.

“I am happy that they could raise the game after two back-to-back disappointments and defeats against Jersey and Namibia. And even against Hong Kong, we were down in doldrums after a top-order collapse. But the grit and fightback from Jatti [Jatinder Singh], Kaleem and Khushi [Naseem Khushi] followed by the brilliance of Bilal [Khan], it was something I am really proud of.”

Mendis said that he was satisfied with the overall performance of his team in the UAE Qualifier as the main goal was to secure a berth in the T20 World Cup.

“As our goal is achieved, I am satisfied. Yes, we could have done in less dramatic manner as we had two chances. But the defeat against Jersey was a setback and that did break the confidence of our players. It reflected in the next game against Namibia. But then, they realised that Hong Kong was the last chance and they grabbed it with a superb display. Be it the knock of Jatti or world-class opening spell from Bilal, I think we proved that we deserved to be in the World Cup.

“Despite a low target of 134, I had the confidence in my boys and they kept my trust as the desire to win was high.”

‘Pentangular series was a boon’

The coach admitted the team’s think-tank was a bit slack in not counting the importance of net run-rate (NRR) in the initial group games.

“In hindsight, we should have kept that in mind. But with victories coming, somehow, we failed to keep focus on the NRR. And that cost us as Ireland went through directly on better NRR [1.591 to 0.997] with both teams tied at eight points.

“We went into the Qualifier with our confidence high as we won the Pentangular Series here in Muscat with three of the participating nations – Ireland, Netherlands, Hong Kong – featuring in the Qualifier.

“But I knew that those teams may have not gone flat out in Muscat. However, the victories gave my players huge boost and that we carried on impressive start in the group stages as we won four of the six games in the UAE Qualifier.”

On Friday, chants of ‘O-man, O-man, O-man’ reverberated the Muscat International Airport as the team was showered with garlands, rose petals, bouquets and sweets distributed on their return from the UAE after sealing the World Cup berth.

Eidroos, MoSA representative, fans, families and friends. “We are in the World Cup for the second time in succession. It is a proud moment for all of us,” said Khimji.

Team manager and OC secretary Madhu Jesrani was delighted that his players secured the World Cup spot and said ‘it shows that the efforts put in by Oman Cricket has paid dividends and we are thankful to the Ministry of Sports Affairs and other stakeholders for supporting us’.

Mendis signed off by thanking the players’ employers for their support and hoped that he could guide the team into the main stage of next year’s World Cup. “That’s my next mission,” he said. One mission completed…next one begins.”