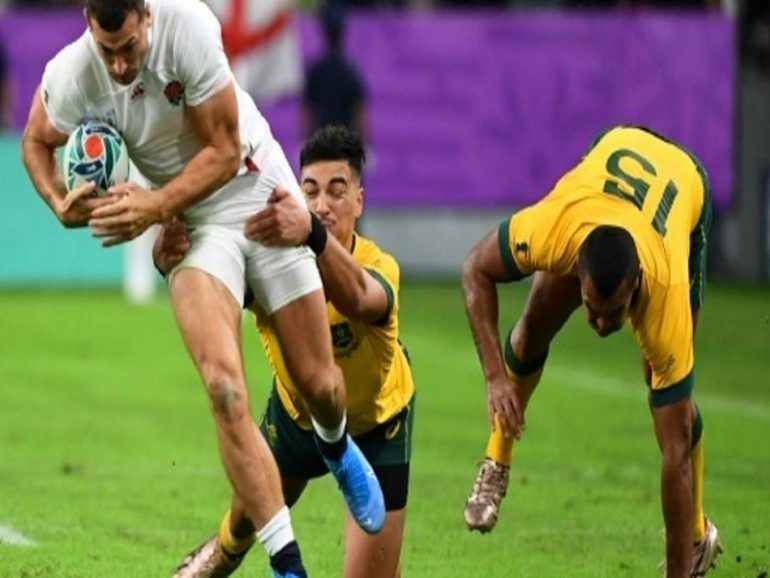 Oita (Japan) (AFP) : Wing Jonny May produced a quickfire double and captain Owen Farrell was perfect with the boot as England stormed into the World Cup semi-finals Saturday with a thumping 40-16 win over Australia.

May celebrated his 50th England cap with his 26th and 27th tries in Oita, while Farrell kicked 20 points for England, who equalled their biggest ever margin of victory against their fierce rivals and move on to face either New Zealand or Ireland in the last four.

“We did what’s needed,” said Farrell. “We had the lead and obviously Australia were throwing everything at us. We wanted to play the game at our pace, not theirs, and we did that in the second half.”

Scrum-half Ben Youngs added: “We’re happy with today, but the exciting thing for me is that I know there’s more in this team.”
Fears England could come into the match undercooked, after their final pool game against France was washed out by last week’s devastating typhoon, proved unfounded.

It also extended England’s winning run over Australia to seven matches dating back to that tournament, when the Wallabies condemned the hosts to a first-round exit with a 33-13 drubbing at Twickenham.

England have now beaten Australia at the quarter-final stage on all three occasions the Wallabies have failed to reach the last four, after 1995 and 2007.
After an early Christian Lealiifano penalty, a slow-burner burst into life with May scoring twice in three minutes to put England in the driving seat.
Henry Slade, making his return from a knee injury, had threatened before England broke through on 18 minutes.

After securing good lineout ball, Farrell deftly switched play to the left and after a couple more phases, Tom Curry’s quick hands fed May to dive over in the corner.

Moments later, England’s prolific winger was again the beneficiary following more fine work from Slade, who picked off a David Pocock pass and sent a clever grubber kick into the same corner for May to finish clinically.

After a close-range Farrell penalty had extended England’s advantage, Lealiifano nailed his third three-pointer of the half to reduce the lead at the break to 17-9.

The masters of knockout rugby, Australia came out firing at the start of the second half, an explosive burst from winger Marika Koroibete putting the Wallabies right back in it.

Back came England, though, with a brilliant pass from Farrell teeing up prop Kyle Sinckler to bulldoze over for his first Test try, triggering a run of 23 unanswered points.

Farrell stretched England’s lead back to 11 with another penalty before Sinckler came up with a huge steal to arrest fierce Australia pressure.

“The better team won — you’ve got to suck it up sometimes,” said Australia coach Michael Cheika, who barked at a reporter to “just chill” for asking him if he was going to step down.

“The lads put everything into it today. I want all the Aussies at home and here to know that — they put their bodies on the line.”

England coach Eddie Jones, in charge of Australia when Jonny Wilkinson’s extra-time drop goal floored the Wallabies in the 2003 final, had little sympathy for his old sparring partner.

“At this time not a lot of sympathy,” he smiled. “I’m enjoying the win — I think I’m allowed to.”