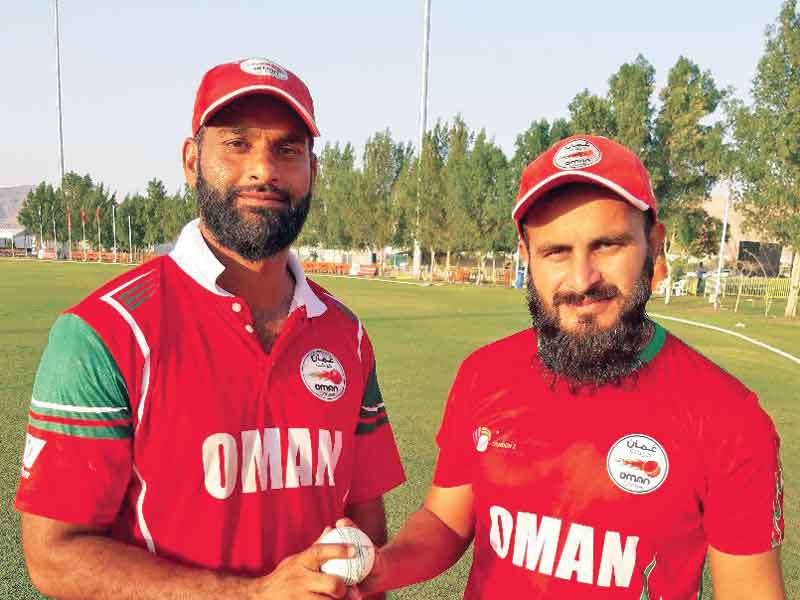 It is often said that successful bowlers hunt in pairs. One has seen many fast-bowling pairs rip through the rival batting unit but on Wednesday, Oman’s spin duo of Khawar Ali and captain

Zeeshan Maqsood came up with a brilliant display to lead the hosts to the brink of title in the Pentangular T20I Series at Amerat.

Leg-spinner Khawar’s four for 16, which included a hat-trick, and left-arm Maqsood’s four for seven, saw Duleep Mendis’ men record a thumping seven-wicket win over the Netherlands to go top of the five-nation series ahead of its concluding league match against Nepal on Thursday.

The third successive victory for the hosts saw them garner a total of six points with a handsome net run-rate (NRR) of 2.116 while Ireland, which had earlier in the day won a thrilling match against Nepal, concludedits engagements in the series with six points and an NRR of 0.648.

Nepal, which has four points from three games, mathematically still has a chance to claim the title if it can topple the hosts on Thursday. However, it would not only need a victory against Oman but it will also need to win by a huge margin to boost its NRR, which is -0.054.

The series is serving as a warm-up for Oman, Ireland, Hong Kong and the Netherlands teams before their participation in the ICC World Cup T20I Qualifiers in UAE from October 18.

On Wednesday, opting to bat first, the Netherlands was shot out for a paltry 94 in 16 overs. Khawar triggered the collapse with a hat-trick after the Netherlands had got off to a decent start with 70 for two in nine overs.

In the next over, Maqsood  was also on a hat-trick as he had his counterpart, Pieter Seelar, and Shane Snater out off successive balls to have the Dutch side tottering at 75 for seven in 11 overs. The Dutchmen  were bowled out for 94.

Oman’s opening pair of Khawar (20) and Aqib Ilyas then stitched a 64-run partnership before Khawar was out in the tenth over. Ilyas made a strokeful 44 as the hosts raced to win in 15.1 overs.

After the win, a delighted Oman coach Mendis told Muscat Daily, “ The boys got a good workout during the past three games. Unfortunately, all the batsmen couldn’t get a chance. That is a bit of a concern for me despite the wins.

“The bowlers did very well and the top-order clicked. The middle-order did not get much of a chance due to match situations. Hopefully, they may get a chance tomorrow. We then have two more practice games before we depart for the UAE?World Cup T20 Qualifier.”

He said, “All in all it was a good preparation for us against good teams and the wins have given the boys confidence. Hopefully, they can carry the confidence in the UAE Qualifier.”

Hat-trick hero Khawar said, “I am bowling with a lot of confidence.  I could deceive the Dutch batsmen with my variations in my hat-trick spell.”