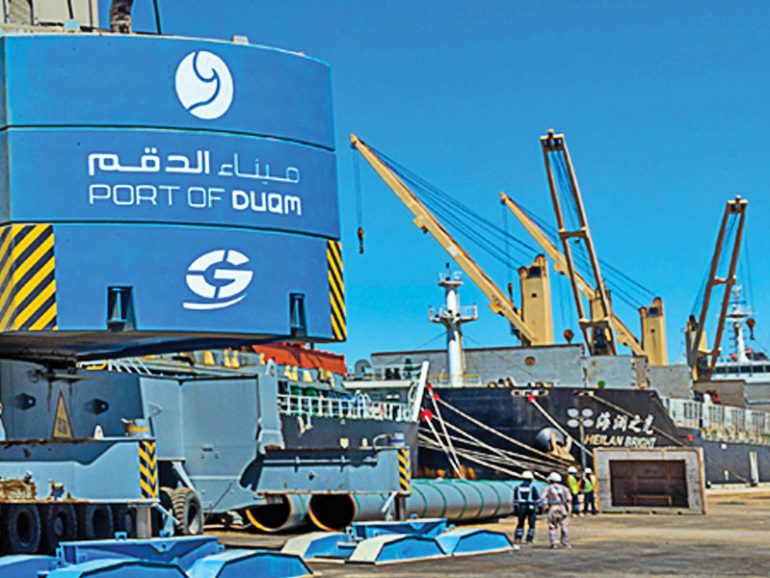 Construction works on the first phase development of the Port of Duqm are in full swing and the phase 1 is expected to be completed by the middle of next year, according to a top official of the port.

Speaking to Muscat Daily, Reggy Vermeulen, CEO of the Port of Duqm, said once the phase 1 is completed, the port will be able to handle between 1.5mn-1.6mn containers movement per annum.

“We are busy finishing the construction of the port as it is not fully ready yet. We are planning to start full-fledged operations in the beginning of mid-2020 and then we will be able to compete internationally,” said Vermeulen on the sidelines of Raysut Cement Company’s signing ceremony for land lease and port terminal services agreements with Port of Duqm for building a new grinding unit in Duqm.

Giving details on projects being under taken in the ongoing phase, he said the work on setting up a dedicated facility for exporting minerals, which will have a capacity to handle roughly 5mn tonnes cargo per annum, is progressing well. Apart from this, the port is gearing up for handling around 2mn tonnes of cargo per annum from Duqm Refinery project alone.

“Duqm Refinery is a prime focus for us. The work at the refinery project is going on aggressively and 30 per cent work on the project is completed,” Vermeulen said, stressing that a dedicated facility inside the port for supporting the movement of cargo specific to refinery is likely to be ready in the next 12 months.

“This will be crucial for the success of the Duqm Refinery. The port will also be instrumental in exporting all cleaned or refined products from the refinery,” he added.

Apart from expanding the port’s capacity, other ancillary support services such as heavy cranes, loading and unloading facilities, and other necessary equipment are also being set up simultaneously at the Port of Duqm.

“In the phase 1, along with the berth and other supporting infrastructure, as many as 13 buildings for housing various ministries, customs, police and immigration will also be coming up inside the port to accelerate the movement of goods,” Vermeulen noted.

He added that Port of Duqm recently awarded the tender for developing a dedicated facility for exporting minerals from Al Wusta region.

“We are working hard with our colleagues from Asyad Group and Oman Shipping Company to market Port of Duqm internationally. Asyad Group is also working on plans to ensure that the port should play an important role in overall development of the country’s logistics sector,” Vermeulen added.