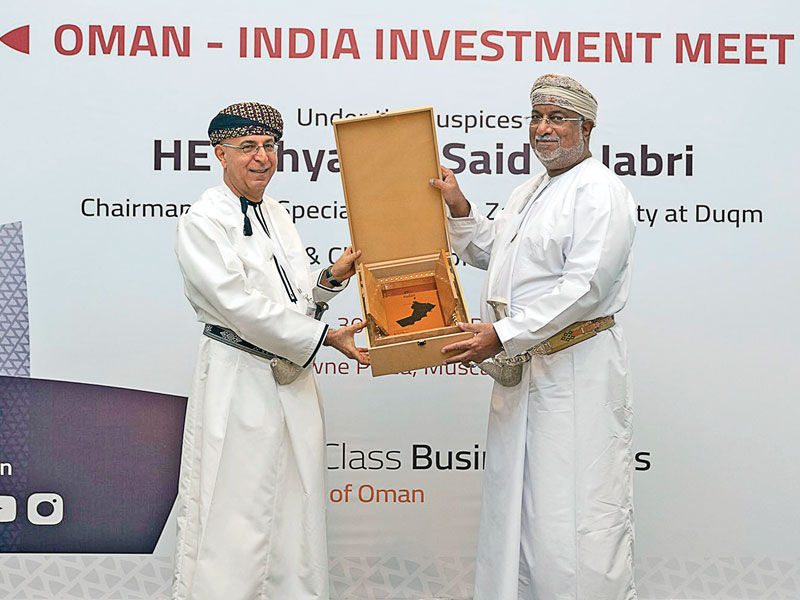 The Public Establishment for Industrial Estates (Madayn) on Sunday organised the Oman-India Investment Meet at Crowne Plaza Muscat under the auspices of H E Yahya bin Said al Jabri, chairman of the Special Economic Zone Authority at Duqm (SEZAD) and chairman of Ithraa.

The event was attended by a high profile business delegation from India comprising 35 businessmen representing sectors including food, logistics, IT, telecommunications and renewable energy, in addition to a number of business and investment officials representing various public and private bodies in Oman.

Speaking at the event, Hilal bin Hamad al Hasani, CEO of Madayn, said, “The industrial scene in Oman is seeing a dynamic investment activity from the Indian investors. In fact, the Indian investors are among the top three nationalities investing in Madayn’s various industrial cities across Oman. With the aim of boosting Oman-Indian investment ties, Madayn has set up a representative office in India to promote Oman and Madayn as an attractive destination for investments.”

The Oman-India Investment Meet has offered an ideal platform to underscore the investment opportunities in Oman in general and Madayn’s industrial cities in particular. The event also provided a great opportunity to explore partnerships between the Omani and Indian companies and factories.

Hasani said, “Today, we have more than 2,200 projects investing in Madayn’s industrial cities, which are employing more than 60,000 of workforce. By the end of 2018, the total volume of investments has touched more than US$17bn. Besides, work is underway to launch two new industrial cities in the country. The two cities will be the first to be fully developed and managed by the private sector through developers with international expertise in this field.”

Nasima al Balushi, director general for investment and export at Ithraa, said, “Oman’s exports to India have more than doubled over the last four years. Over many years, our two nations have built shared interests in each other’s prosperity, in the generation of jobs, the development of skills and the enhancement of competitiveness.”

She noted that Omani companies are capitalising on India’s outstanding growth and doing business across India in sectors such as food processing, energy, infrastructure, tourism, fisheries, mining and manufacturing.