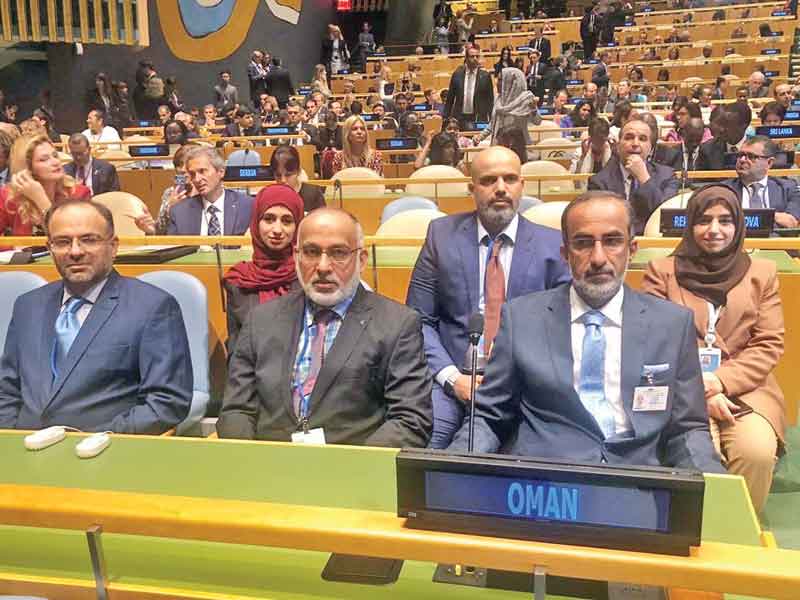 Oman is following a roadmap to achieve the United Nations Sustainable Development Goal number 13, which calls for urgent action to address climate change and its impacts.

H E Toobi stressed the need for civil society and the private sector to cooperate with the efforts of the government to reduce the risks of climate change.

He added that the sultanate always seeks to address the negative impacts of climate change risks and contributes to reducing its challenges.
While Oman, according to the World Economic Forum (WEF), has ranked ninth globally in the implementation of environmental laws, it is placed 11th in the Toughness of Environmental Law Index, and 22nd in sustainability in the development of industry for travel and tourism.

Part of the action on climate change, the sultanate presented its first voluntary national review on UN Sustainable Development Goals (SDGs) for 2030 in New York in July this year.

Headed by H E Dr Ali bin Masoud al Sunaidy, Minister of Commerce and Industry and Deputy Chairman of the Supreme Council for Planning, Oman’s delegation presented Oman’s progress report on SDGs, including the review of its action taken towards climate change.

The national report stated that Oman is one of the leading countries in dealing with all issues related to the environment and climate, and it is keen on supporting international solidarity to address the problem of climate change and its negative effects. ‘The sultanate has contributed effectively in reducing the risks of global warming and the adverse effects of climate change,’ the report stated.

Oman has ratified the international conventions related to climate issues including the United Nations Framework Convention on Climate Change and the Kyoto Protocol, the Vienna Convention for the Protection of the Ozone Layer and the Montreal Protocol on Substances that Deplete the Ozone Layer and its amendments.

The sultanate, in collaboration with the United Nations Environment Program (UNEP), has prepared the National Strategy for Adaptation and Mitigation of the Effects of Climate Change. ‘Sultanate’s second national communication on vulnerability, risks, climate modeling, future climate outlooks and ways to mitigate greenhouse gas emissions is currently being prepared.’

Oman, through the issuance of the regulations on ozone layer protection in November 2013 and their updates in December 2015 has reduced the consumption of ozone-depleting substances to zero, or to levels lower than those required in the Montreal Protocol.

The sultanate has started implementation of the second phase of the National Strategy for the Phase Out of Hydrochlorofluorocarbons (HCFCs) from 2016 to 2020. It aims to complement the efforts to meet the compliance requirements of the Montreal Protocol and achieve 35 per cent reduction in the consumption of HCFCs by January 2020.