ICC, cricket superstars clap for Oman for its ‘40 glorious years’ 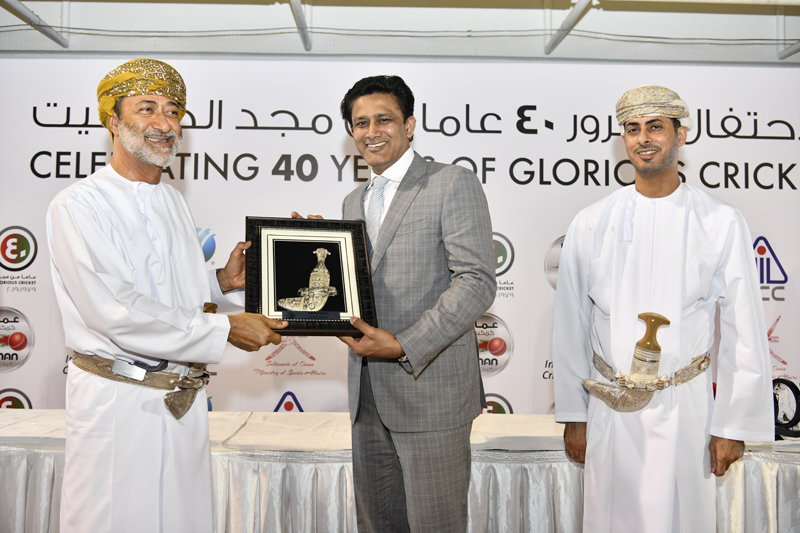 Oman became the latest country to win ODI status from ICC and is currently ranked 15th in international cricket.

“This is the highest ranking Oman has achieved in any team sport at global scale. We dedicate this recognition to His Majesty Sultan Qaboos bin Said as we approach the 50 golden years of His Majesty the Sultan’s reign and Oman’s Renaissance. From where it all started – rocky outcrops, gravel plains and sandy outfields at Seih al Malah and Muaskar al Murtafa – with coir matting and cement wickets, we have come a long way. His Majesty the Sultan’s benevolence, showered on Oman’s cricket community, is a testament to his unconditional support for the holistic idea of youth development in Oman across communities,” said Pankaj Khimji, senior board member of Oman Cricket (OC), in his welcome speech.

Congratulating Oman Cricket on its 40th anniversary, William Glenwright, head of Global Development at ICC, heaped praises on Oman for showing promise to become the new shining star in international cricket. “Oman has done tremendously well to have achieved ODI status in a sport that is played in 104 countries by over 460mn people around the world. That must be a source of great pride for the people of Oman. It is heartening to note that Oman’s women’s team is on the cusp of participating in an ICC event. Since developing women’s cricket is a priority for ICC we hope to see Oman in the forefront of that ship in the coming years,” he said.

“We all know how important are partnerships in the game of cricket and I am pleased to know about the wonderful partnership between Oman Cricket and the Government of Oman which has contributed to this world-class facility (Oman Cricket Academy in Amerat) and which has contributed to Oman’s remarkable success in international cricket. I wish to congratulate the entire cricket community in Oman for 40 wonderful years,” added the senior ICC official.

Kumble said he was proud to be present as Oman Cricket celebrated its 40 glorious years. “Congratulations to everyone involved in the journey,” said India’s most successful bowler with over 1,000 international wickets.

Jayawardene said he was honoured to be part of the celebration and loved the country and its people. “I have noticed and appreciate the passion and love that is associated with the overall development in Oman. Oman Cricket has come a long way.”